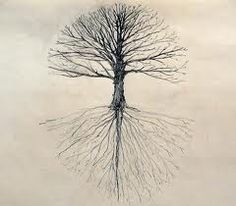 It was so dark she didn’t know if she was really there.

Her face full of the metallic earth, all mud, and rain, and rot.

Her fingers grasped the crisp mulch that seeped into her clothes.

It was so dark her eyes could only make out shades of black and blue.

Her hand reached up to her matted hair and pulled at a leaf.

The shadows became giants, then trees so tall they scraped the sky.

How much more she could see if she stopped and waited.

The moon shone between the holes in the canopy providing just enough.

Clambering to her feet she stretched her damp limbs.

Around her the world was slow but more noisy than she ever knew.

The path ahead was her way out, why she had come here; to die.

The path back from where she came still remained.

As she did her eye caught sight of a tree; clusters of flowers as bright as the stars.

It seemed to become the night sky, full of hope in the dark.

And walked with open arms into the mass of branches discovering thorns sharp and true.

Each snare snatched at her clothes and tore at her skin, but she pushed forward.

Feeling something ok was on the other side, knowing it was something different.

On the other side of the hawthorn there was a path she hadn’t seen before.

With leaves in her hair, the moon in her eyes, and blood on her skin.

A new life on a path she didn’t know but one that could never be the one she’d trod before.